UMIST: Past, Present, and Future.

The once-proud University of Manchester Institute of Science and Technology (UMIST) has been defunct for almost a decade, but its former sight near Piccadilly hasn’t left us just yet.


UMIST began in 1824 as The Mechanics’ Institute and was founded at the historic 103 Princess Street – the site on which both the Trades Union Congress (TUC) and the Co-Operative Insurance Society (CIS) were also established. By the late nineteenth-century, the Mechanics’ Institute had out-grown its home on Princess Street and in 1902 moved to the enormous Main Building (now Sackville Street Building), bringing most of its schools together for the first time. The construction of the building’s extension began in 1936 but the process was continually beset following the Second World War; the extension was finally completed in 1957 just as the broader expansion of the university was getting underway.

After gaining its Royal Charter in 1955 (for the most part, degrees were still awarded by the Victoria University of Manchester), the Manchester College of Technology entered a period of accelerated and significant expansion. The buildings that emerged from this transformative period were most unlike the campus’ flagship Main Building; brutalism was in vogue, and a series of angular and concrete towers were erected south of the railway viaduct during the 1960s. The first to top-out was the playful Renold Building, with its ‘zigzag’ panelled exterior and external glass staircase. For lovers of modernism, Renold remains a classic; for many others, it's an out-dated eyesore. Having missed out on gaining listed status in 2008, the future of the Renold Building isn’t quite as secure as some would like it to be, but with its masses of lecture-theatre space and close proximity to Piccadilly Station, the building still serves an important purpose for the University of Manchester as a conference facility. 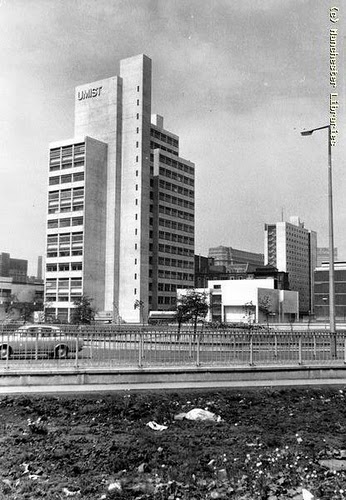 The completion of the Renold Building was closely followed by construction of the Barnes Wallis Building (1964), the Faraday Building (1967), and the legendary Maths and Social Sciences Building (1968). Each of the new constructions embodied the principles of the modernist movement – all are concrete, angular, functional, and imposing. It may be hard to imagine now, but the M&SS Building once stood as a proud and triumphant symbol of UMIST's spirit as a world-leading centre for scientific excellence. The modernist revolution south of the viaduct gave UMIST a campus to match its forward-thinking and ambitious ethos; as academics moved into their new soaring tower blocks, the international reputation of the university appreciated enormously – most who were there agree that the campus’ unique architectural collection played a role in creating UMIST’s exciting academic culture.

Chandos Hall was another to be constructed in the early 1960s, and like the Renold Building, the fifteen-story Chandos tower incorporated an external glass staircase. Littered with rectangular windows, Chandos in many ways mirrored the exterior of the Barnes Wallis Building/Wright Robinson Hall which went up at the same time. Where Chandos was used exclusively for student accommodation, the Barnes Wallis Building became the centre of student-life at UMIST and went on to achieve nation-wide notoriety for its raucous students' association bar that hosted many of the biggest bands in the world during the '60s and '70s.

But in 2004 the party was brought to a close. UMIST and the Victoria University of Manchester merged - though it was really more of an absorption of the former by the latter. Within three years of the merger it was announced by the new entity – The University of Manchester (UoM) – that many former UMIST buildings would be sold off, or even levelled. The university’s 2007 Estates Strategy states clearly that it is the aim of UoM to “relocate those schools at the north of the campus to land already owned by the University [on Oxford Road]”. In other words, the UMIST campus will be closed and sold-off, transforming UoM into a single-site university by 2018.

While expedient and understandable, the University’s plan has placed many of these important buildings in precarious situations. The once-glorious M&SS Building now exists in the eyes of most as a monstrosity in need of demolition. While it looks like its best days may be behind it, I can’t help but think that something could be done to restore and save this grand structure – as an aspirational ‘skyscraper city’ Manchester should be doing everything it can to preserve its current tall buildings; fresh cladding and an interior renovation could transform the M&SS Building into a centrally-located apartment block, positioned as a prime landmark in the south of the city. Such a transformation is, of course, unlikely, and it's possible that the M&SS Building could vanish from the skyline by the end of the decade.

The future of the truly-epic Sackville Street Building is really anyone’s guess. The University seems committed to finding a fitting use for the building but a number of covenants restrict it to educational use only. The disappointing reality is that it’s unlikely that an educational provider other than The University of Manchester could afford to occupy and maintain this enormous structure. That said, it’s possible that a number of schools could come together to take on this extraordinary building and transform it into a vibrant centre of learning for children of all ages. And it’s also possible that the covenants could be overridden or modified by the courts, but still, it’s difficult to think of a potential occupier for the site - though if we ever got serious about devolution in the north of England, Sackville Street would be the perfect place to house a Greater Manchester Assembly and its administrative offices (something to keep in mind, maybe?).
The futures of the Faraday and Renold Buildings, however, look markedly more secure. The University recently invested £3.4 million into Renold and it seems that its role as a prime conference venue will ensure that it continues to remain part of the University’s estates portfolio. And the Faraday Building, once a world-leading centre for Chemical Engineering, looks set to be converted into student accommodation. It's crucial that Faraday survives in its present form; it's the most decorative of all the site's '60s buildings and stands as a mischievous challenge to UMIST's modernist orthodoxy. 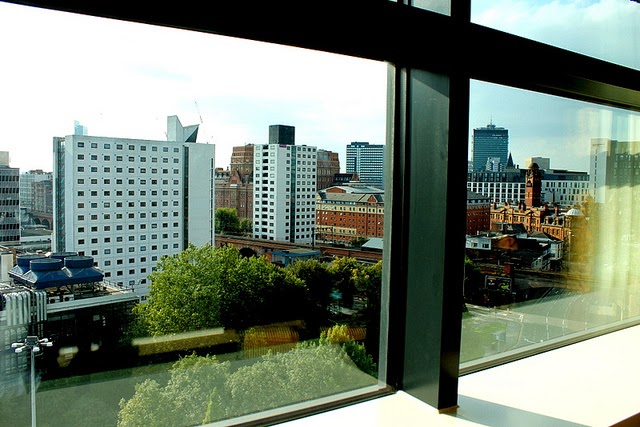 The buildings that remain on the old UMIST sight are certainly not to everyone’s taste. In isolation, many seem archaic, ugly, and even offensive; but when taken together the tall white concrete blocks that stand south of the viaduct remain an important and striking architectural collection. If the set cannot be saved, it’s still comforting to know that at least a couple of these grand structures will likely survive.

But admirers of Mancunian architecture should be worried about the fate of the Sackville Street Building. The structure is much too grand and imposing to sit empty in that part of Manchester  – an occupier(s) must be found, and found quickly. In fact, if I had one architectural wish it would be that we could move the building brick-by-brick to the University’s Oxford Road campus. But pipe-dreams aside, we must hope that a purpose is found for this magnificent old building; for me, it was Manchester’s greatest when it was built more than a century ago, and it will still be one of Manchester’s greatest a century from now. 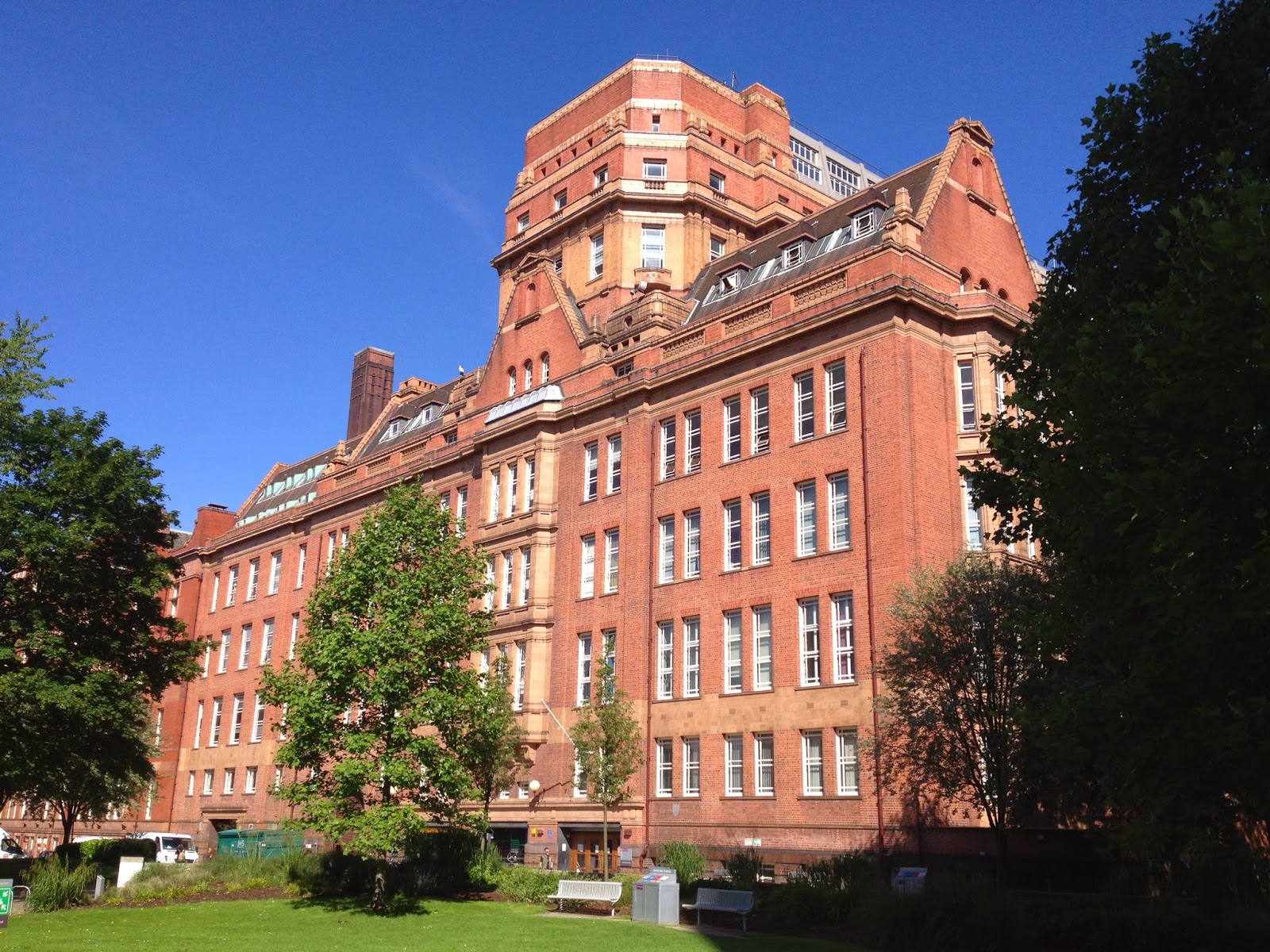